Disclaimer:
I am in no way an expert at this.
This entry details my experience crossing the Rakaia and Rangitata rivers. It proposes an alternate route (as yet unwalked) from Lake Coleridge to the trailhead on the south bank of the Rakaia. The idea is to put another option on the table for experienced and confident trampers who wish to avoid a long roadwalk and awkward transition to the next section of trail.

The Rakaia river is one of the largest braided rivers in NZ. The headwaters of the river are located within the Southern Alps and extend back to the main divide. Its main tributaries in the upper catchment are the Mathias and Wilberforce Rivers which extend the catchment to the north-west and north respectively. The headwaters are glacially fed and exposed to north-west rainfall which results in regular floods during spring and early summer. This means that at times when conditions are dry on the plains, the flows in the river can still be relatively high. The river has a catchment area of approximately 2,900 square kilometres of which 2,600 square kilometres (90%) is upstream of the Rakaia Gorge.

The Te Araroa Trust (TAT) defines the river as a natural hazard zone which does not form part of the trail. Instead it marks a natural break in the continuum, just like Cook Strait. The trail notes go on to state that even in low flows it is not possible to safely ford this river on foot anywhere near Te Araroa’s trailhead on the north bank.

While it may not be possible to cross the river near the TA trailhead on the north bank it is absolutely possible under the right conditions to cross the Rakaia further upstream.

As of 22/1/15 I was able to cross the Rakaia river.
I began the crossing from Algidus Rd on the north bank of the Rakaia in the area of Peak Hill Station. I proceeded in a WNW direction towards Glenrock Station, which was in clear view across the river, selecting crossing points carefully ie the shallower riffle areas. Some time was spent walking upstream to find suitable riffles. After ~1.5hrs the final hurdle seperated me from the southern bank. The last braid was (of course) the deepest, reaching a little over knee height (I’m 6’3”) and flowing fairly quickly. I crossed just above the power lines but there is certainly a better spot to cross further upstream.
This section of the river including both Peak Hill and Glenrock Stations are visible on the official TA map 102.

The route I took crossed first the Wilberforce and then the Rakaia river. It is important to cross above the confluence of these 2 large rivers, thereby attacking them separately rather than both in the one channel.

However, this route I took is not the most efficient!
You end up road walking all the way around Lake Coleridge (some 30km) and then another 15km up Algidus Rd to a point where you can cross the Wilberforce/Rakaia. While these roads are unpaved and lightly trafficked they are still roads and roadwalking is shitty.

The official route from TAT recommends that trampers get to Lake Coleridge village and then continue road walking/hitching to the Rakaia Gorge and then all the way back up the other side. This is a rather large detour and I have heard of people entirely skipping the section between the Rakaia and Rangitata rivers due to this awkward transition. I would strongly recommend not doing this. It’s a really nice section and walking into the Rangitata valley was one of the highlights of my trip.
Many TA Tramps end up hitching out to Methven to resupply before continuing back up to the trailhead on the south bank. The majority of people I talked to that used this strategy had no problem securing a ride back up. So it’s not the end of the world.

There is another alternative.
My future plan for this section is to avoid road walking and instead head west from the northern end of Lake Coleridge. Continuing over the Wilberforce and along the riverbed, skirting Mt Oakden before crossing the Rakaia, linking up with Double Hill Run Road and south to where the TA picks up once more. This route departs the offical TA at 2199km and rejoins at 2229km . It would be at a minimum around 20km, but could easily be a few more if some scouting is needed to find suitable braids.
Something like this:

The idea being you would send a box to Arthur’s Pass and then go all the way through to Lake Tekapo. A distance of approximately 215km (river crossings included).

As yet I have not taken this route. I intend to walk it later this summer and record a GPS track first hand.

Some data:
The NIWA research institute collects data on river flow for both the Rakaia and Rangitata rivers.
The Rakaia flow rate is measured at Fighting Hill in the Rakaia Gorge. This is far downstream of where you would want to ford but the data collected can give you an idea of current river conditions.
http://www.ecan.govt.nz/services/online-services/monitoring/river-flows/pages/river-flow-chart.aspx?SiteNo=168526

For example. The day I crossed the Rakaia/Wilberforce (22/1/15) the flow rate was ~175 cubic metres per second/cumecs. As of this writing it is ~120 cumecs
The flow on the day I crossed (175 at Fighting Hill) was definitely manageable, most of the braids under knee height. I didn’t feel unsafe at any time but I would say that is around the boundary, much more water and I would not attempt to cross.
I stress this is a rough way to gauge water flow. The conditions upstream in the Wilberforce and Rakaia may well be different.

The view north to the Rakaia and Wilberforce rivers

The Rangitata is generally the easier of the two rivers to cross. I crossed on the 23/1/14 following the rough directions on the TA map, above the Potts River and then continuing SW. Flow rate on this day was ~65 cumecs (compare that to the 175 of the Rakaia), it was a very simple and straightforward crossing at this time.
GPS track recorded on 23rd: 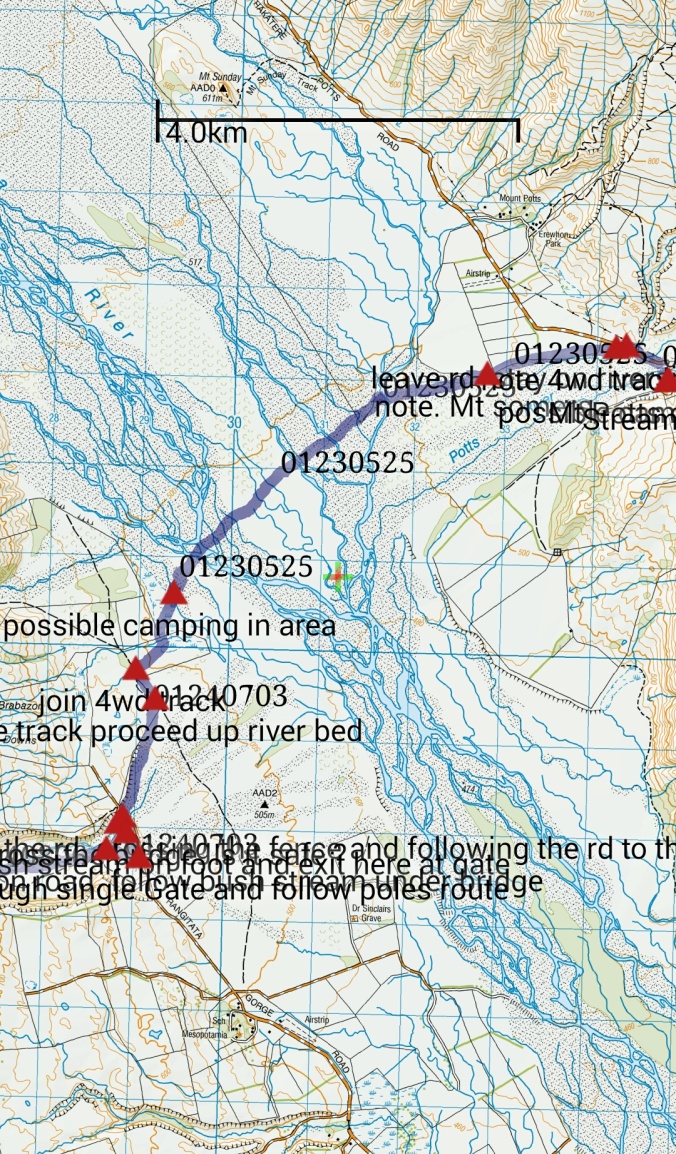 NIWA also collects flow data on the Rangitata:
http://www.ecan.govt.nz/services/online-services/monitoring/river-flows/Pages/river-flow-chart.aspx?SiteNo=69302
It is measured at Klondyke, which is at the outlet of the gorge. Again this is a long way from where the TA interects the river, but the data can give you an idea of river conditions.

In summary, both of these rivers are absolutely crossable under the right conditions. The Rangitata is generally the easier of the two. If conditions are right in the Rakaia, a more optimal route continuing west above Lake Coleridge may save experienced trampers time and provide a more streamlined hike.

By 1870, just a few decades after European settlers first arrived, rivers had been responsible for 1,115 recorded drownings. Drowning became known as ‘the New Zealand death’.
These rivers are no joke. If you are going to attempt anything like this please be careful.

10 thoughts on “Te Araroa – Crossing the Rakaia and Rangitata rivers”